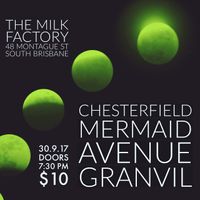 Influenced by the collision of Indie Rock & Americana epitomised by bands such as Wilco and The War on Drugs, with a healthy dose of 'Purple Sneakers' style nineties classicism, Mermaid Avenue are a Brisbane based rock band built on the songwriting of Peter Clarke. Forming in 2015, they have since become a regular fixture on the Brisbane scene playing numerous local venues such as the Bearded Lady, The Globe Theatre, Beetle Bar and Rics Cafe. In November of 2015 they had the pleasure of supporting Nick Barker & the Heartache State at the Beetle Bar. In April 2016 they were invited to play at 'Triffid Roots' presented by Sarah Howells of Triple J at the Triffid. In early 2017, Mermaid Avenue headed into the studio to cut their debut album which will be due for release in late 2017/early 2018. Current members include lead guitarist Darren Madeo, bass player John Doyle Anthony Judd on drums and Marc Besselink on keys. https://www.mermaidavenueband.com/music